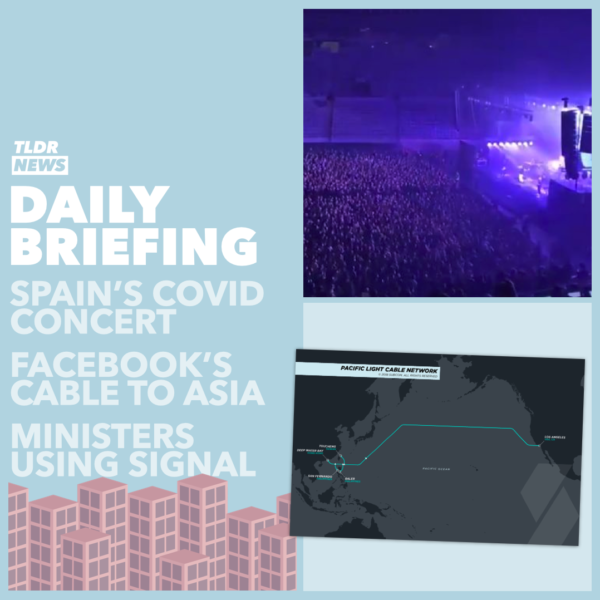 Mar 29: A Gig in Barcelona, Facebook’s Underseas Cables, Ministers’ Disappearing Messages, and Fundraising in a Tent

A Gig in Barcelona

In the first story of the Daily Briefing today, we go to Spain to discuss a pilot scheme that allows for large outdoor events. Here in the UK today, we’re experiencing the second part of phase one of unlocking in the Prime Minister’s roadmap. This means that groups of six (or two households) can meet outdoors – with social distancing. For some, this will finally allow them to meet up with family and friends. For others, though, this will make little difference to their lockdown experience – and they will still be pining for future lockdown easing steps, where outdoor events can take place.

Perhaps they’re even jealous of people in Spain right now. That’s because, on Saturday, a concert (featuring the band ‘Love of Lesbian’) was allowed to go ahead, with no physical distancing and an audience of about 5,000. In order to curb the spread of the virus, though, all attendees had to wear face-masks and provide a negative test result on the day of the concert. Additionally, temperature and ID checks were carried out on attendees before they entered the gig.

It should be noted, though, that this was simply a pilot scheme – and so far, simply a one off. Doctor Josep Maria Llibre told AFP news agency: “we expect it to be completely safe. Over the next 14 days we will look at how many of the audience test positive for Covid and will report back”.

Let’s all hope that the result from this pilot scheme is that such events are safe, and that we can all get back to large-scale public events, safely, soon.

In the second story today, we discuss a planned infrastructure project, set to be completed by Facebook and Google. While both companies are well-known for the services they provide online – it’s fair to say that neither are that famous for their infrastructure projects. Well, that might be starting to change, with both Alphabet (Google’s parent company) and Facebook funding the Pacific Light Cable network.

The network is set to be about 13,000km long, and aims to connect Hong Kong with the US, Taiwan and the Philippines via underwater cables.

Although the project now seems to be going forward, it was only last year that the project had to be put on hold due to “government concerns”. The fact that this project is still going ahead, though, clearly shows that both Facebook and Google are keen to grow their user-bases in the big economies of South-East Asia.

We’ll need to see exactly whether, this time, the project will be able to continue as planned without government intervention.

In the third story of the Daily Briefing today, we move to the UK to discuss government ministers’ use of the communication app Parlour. Anyone with even a passing interest in technology will remember the poorly executed WhatsApp user agreement update. In effect, WhatsApp pushed out a new user agreement that was interpreted as the company making it easier for them to share your private messages. This was not the case.

Nonetheless, many users abandoned the app in favour of Signal – which was perceived as being more privacy focussed. As part of the supposed improvement in privacy, users are able to send disappearing messages – meaning that neither the sender nor the recipient can re-read the message after a given amount of time.

The issue that has arisen is that ordinary citizens were not the only ones to move over to Signal Politicians did so too – and could even have used the self-destructing message mode.

It appears that transparency campaigners may be seeking a judicial review on the issue to try and stop government ministers using a feature, which they claim, helps them evade accountability. Some campaigners have claimed that it is undemocratic that at the same time the government is gathering more and more data on us, we have less and less data on them.

What do you think, though? Is this going to hold the government to account more or is this a non-issue?

Fundraising in a Tent

In the final story today, we stay in the UK to talk about some much-needed positive news. We all remember last year when Captain Sir Tom Moore raised around £30m for NHS charities in the wake of the pandemic – but since then, there has been a notable lack of similar stories. However, some individuals are still doing heroic things during the pandemic. So, let’s discuss another one.

The person we’re discussing today is 11 year old Max Woosey. Last year, on the 28th of March, he decided to spend one year sleeping in a tent in order to raise money for a hospice who looked after a family friend, Rick Abbott. Mr. Abbott gave Max his tent, and told him to “promise me you’ll have your own adventures in it”. Clearly, Max heeded his words.

To mark the one-year mark of his prolonged adventure, more than 1,000 children world-wide participated in the Big Camp Out. This helped him to push his fundraising total to over £500,000.

In support of Max’s efforts, both Bear Grylls and Jonny Wilkinson sent him messages of encouragement.

We just want to say a big congratulations to Max and everyone else who helped him raise such a phenomenal amount of money for such an amazing cause. If you want to donate, a link can be found here.