Home Daily Briefing October 29: An Attack in Nice, Jeremy Corbyn Kicked Out of the Labour Party & a National Lockdown 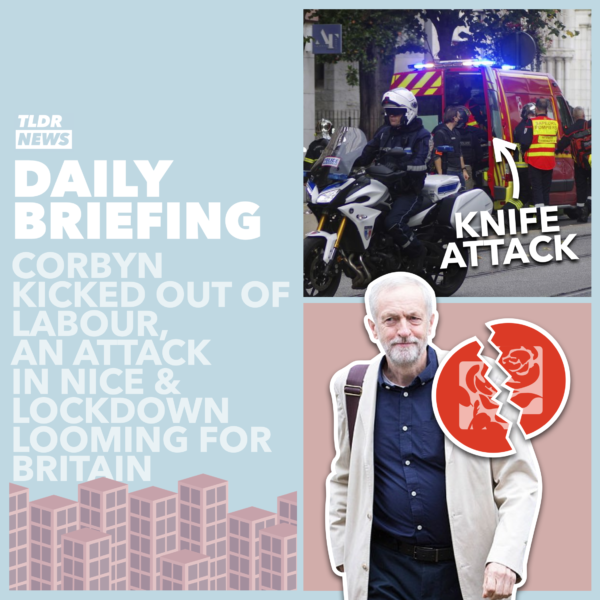 October 29: An Attack in Nice, Jeremy Corbyn Kicked Out of the Labour Party & a National Lockdown

An Attack in Nice

In the first story of the Daily Briefing today, we report on a tragic event that has happened in France. It’s always a difficult decision when writing the Daily Briefing whether or not to include terror attacks – we know that sometimes this format can be upbeat, and for that reason, maybe discussing such tragic events isn’t right. However, it feels more wrong not to include such stories – as we’d be deliberately avoiding difficult subjects. For this reason, we’ve decided to include the attack in France in today’s briefing.

Early this morning, at around 9am, a knifeman entered the Notre-Dame basilica, in the centre of Nice, and killed three people – while injuring many more. The attacker was shot by police, and taken to hospital.

The police described the incident as like a “vision of horror”, while the mayor of Nice has branded the attack as being motivated by “islamofacism”. This comes only two weeks after the barbaric beheading of Samuel Paty for showing a picture of the Prophet Mohammed in his classroom. The mayor has spoken of this event when discussing the horrors that have happened today.

In response to this attack, President Macron has confirmed that he will travel to Nice today.

Our thoughts are with all of the families and friends of the victims of the attack.

Corbyn Kicked Out of the Labour Party

In British politics, let’s take a look at the newly published report on antisemitism in the Labour Party. Under the leadership of Jeremy Corbyn, Labour were accused of complacency towards growing antisemitism in the party. The new report, produced by the Equality and Human Rights Commission, has generally agreed with this claim.

Specifically, they have said that Labour “at best did not do enough to prevent antisemitism and, at worst, could be seen to accept it”. In addition to this, it found that Labour were responsible for unlawful acts of harassment and discrimination”. Specifically, Ken Livingstone was one individual who was deemed to have committed such acts.

It additionally found that complaints of antisemitism were marred by political interference. The report doesn’t get any better for Labour either, as it found that there was a failure within the party to provide training to those who handled antisemitism complaints.

The Labour Party has agreed to accept all of the recommendations of the report in full. Kier Starmer held a press conference to respond to the report, which he described as “hard to read” saying that it was a “day of shame for Labour”.

As a result, Jeremy Corbyn was suspended from the parliamentary Labour Party –  a remarkable turn considering he was only leading the party a few months ago. This means that that the whip has been withdrawn and that he must now sit as an independent, rather than as a Labour MP.

Corbyn reacted to this decision via a Facebook post where he said he would “strongly contest the political intervention to suspend me”. He went on to remark that he “ will continue to support a zero tolerance policy towards all forms of racism” but that he still believed the number of people accused of anti-semistism had been overstated “not the seriousness of the problem”

The Conservatives have seemingly taken this opportunity to highlight Starmer’s previous praise for Corbyn, tweeting that not long ago the Labour leader was happy to praise his predecessor. Whether this attack will land or if Starmer’s strong condemnation of both anti-semism and Corbyn is enough is yet to be seen.If you want to hear more about this issue and others, we have a new episode of our podcast out soon which discusses exactly that.

For our final story of the Daily Briefing, we stay in the UK, but move onto the topic of the pandemic. While other European nations have been going back into full March-style lockdowns, the UK has so far resisted such a move. However, as infections are rising (to around 100,000 new positive cases per day), as public pressure is mounting for the government to make a decision about Christmas and as some scientists are pushing for a national lockdown – it’s beginning to look as though the government may be able to resist such a move no longer.

One such scientist pushing for a national lockdown is Steven Riley, professor of infectious disease dynamics at Imperial College London. He has stated that he thinks we need to “think about changing the approach” in the UK.

Despite this mounting pressure, and scientific backing for a second lockdown, the government is sticking to its guns – with Housing Minister Robert Jenerick stating that the government will do “everything in our power” to avoid a second national lockdown, claiming that it would actually do harm to the nation.

We’ll have to see exactly how long the government can resist such calls.