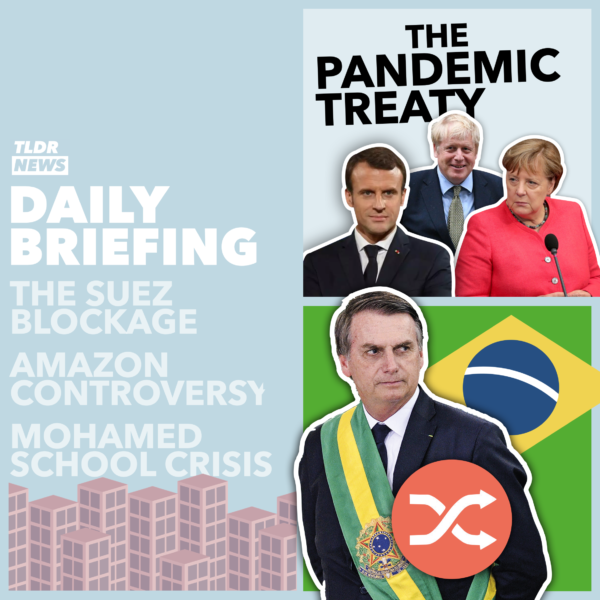 Mar 30: A Letter Signed by World Leaders, China vs Hong Kong, and the Controversial Reshuffle

In the first story of the Daily Briefing today, we discuss the global news that more than 20 world leaders have expressed an interest, via a letter, in a ‘pandemic treaty’, in order to ensure that future pandemics aren’t as destructive as the current one. While we’re all still counting down the days until this pandemic is over, luckily politicians are looking a bit further forward. After all, the worst outcome from all this is for all this pain, suffering and sacrifice to finally end, only for another serious pandemic to come along and plunge us back into lockdown cycles.

However, while the treaty has not been signed, leaders have been clear about what they expect (and hope) to be included in it. Specifically, they want data sharing agreements (presumably to better identify new viruses and variants); vaccine sharing schemes; and personal protective equipment (PPE) sharing schemes.

The letter stated that “The Covid-19 pandemic has been a stark and painful reminder that nobody is safe until everyone is safe”.

While many can get behind such a statement – including, it seems, Prime Minister Boris Johnson – this statement seems to run counter to the UK’s own vaccine goals in this pandemic. As we explained, the letter makes clear that the treaty will make future pandemics more of a global effort – with one of the goals being to more fairly distribute vaccines.

“I think our focus has to be to try and keep Britain safe, we want to work cooperatively as well with other countries but the main priority is to get the vaccine rollout”.

While we can all debate whether this is the right move, and about notions of vaccine nationalism generally, it’s fair to say this is a marked diversion from the Prime Minister’s stated aim in the letter to distribute vaccines nationally (albeit, in the next pandemic).

Nonetheless, what do you think? Is this simply an observation that the British government would act differently in the next pandemic to this one, or is this an example of hypocrisy when it comes to vaccine distribution?

In the second story today, we move to Hong Kong to discuss the developments in the on-going story related to its relationship with China. Many will remember that we have covered this story regularly in the Daily Briefing, highlighting the attempts from China to subvert democracy in Hong Kong – to the dismay of the global community. Well, today, it seems that they have yet again taken this a step further.

Hong Kong has a complex relationship with China – but under an agreement with the UK that allowed for the handover of Hong Kong – China agreed to respect certain aspects of the Hong Kong state. This includes elements of democracy – something that Chinese cities wouldn’t be granted.

As we said, in the last few months, China appears to have started to break this agreement. Today, for example, China has halved the number of directly elected MPs in Parliament – and has even introduced rules that mean that each MP must be ‘loyal’ to mainland China. This, in effect, means that each MP will have to be vetted by a pro-Beijing committee to ensure that they are loyal to the party.

Many world leaders are outraged at the move, with US Secretary of State Anthony Blinken describing the change as an “assault on democracy”.

In the third story of the Daily Briefing today, we move to Brazil to discuss a reshuffle. Brazil is currently undergoing a huge spike in coronavirus cases. The most recent 7 day average is 75,000 new cases per day. Unfortunately, there has additionally been a huge number of deaths related to cases in Brazil. So far, more than 300,000 people have lost their lives.

In recent weeks, the Brazilian health care system has begun to collapse, with a lack of beds in intensive care units and COVID-19 units in all par two states running at more than 80% capacity. President Bolsorano has opposed quarantine measures imposed by state governors, and has consistently downplayed the impact of the virus. He has stated that if measures such as quarantine were introduced, the effect on the economy would be worse than the health impact.

Despite moving through four Health Ministers in the pandemic, President Bolsorano has today announced a cabinet reshuffle. In this reshuffle, five cabinet ministers have been replaced – including Foreign Minister Ernesto Araujo. Arujo was one of Bolsorano’s closest allies, but has recently failed at procuring vaccines for Brazil. Some reports suggest that he was too close with the former Trump administration, which in turn has meant that he is not that popular with the Biden administration.

Whatever the reason is, Bolsonaro clearly isn’t happy with his inability to purchase vaccines.

What do you think about the reshuffle, though? Is it a vain attempt by Bolsonaro to shift the blame away from himself, or does this signify a change in policy?

In the final story today, we move to Italy to discuss the arrest of a Mafia fugitive. Marc Feren Claude Biart has been wanted by the Italian police since 2014, for allegedly trafficking cocaine into the Netherlands on behalf of the Mafia.

He had managed to evade capture for a number of years, with the police now reporting that he has been living a quiet life in Boca Chica, in the Dominican Republic. How then, you’re probably asking, was he caught? After all, it’s on the other side of the globe – how on earth did the police manage to find him?

Well, Mr. Biart wasn’t as careful as he may well have thought. Potentially getting bored of the ‘quiet life’, he decided to start a YouTube cooking channel. Of course, he carefully hid his face in the videos – not wanting to be recognised and captured. Unfortunately for him, though, his distinctive tattoos were a bit of a giveaway, and his cooking channel led the police right to him – ending his 7 years on the run.

He has now been extradited to Italy to face charges.