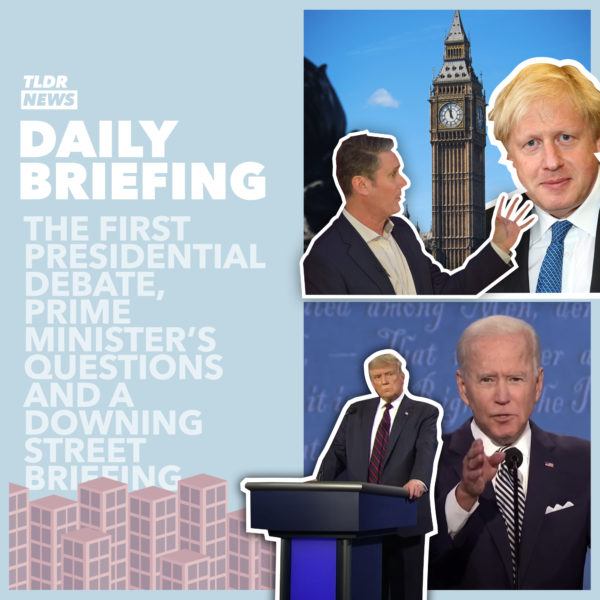 The first story in the Daily Briefing today relates to the very first of this years’ presidential election debates. As with all presidential debates, both candidates were firing with both barrels – with Biden calling Trump the “worst president” the country has ever had and Trump attacking Biden’s son, Hunter, on multiple occasions.

One of the most noted parts of this debate was a section where the President was given the opportunity to denounce white supremacist groups – something he originally agreed to, but then trailed off without actually saying he denounces them.  This has been viewed by some as a failure to denounce radical groups.

Trump’s taxes also featured in the debate today, with the President defending himself on the issue by claiming that he pays millions in taxes.

If you want to find out more about this debate then, lucky for you, we have just released a video explaining the debate and providing highlights from it!

Following the presidential debate early this morning (if you’re in the UK like I am), the British Prime Minister (like the US President) went head to head with the man gunning for his job, Sir Keir Starmer. Although feisty, it was not quite the spectacle of the US debate.

The main topic today was that of the local lockdown strategy that the UK government is pursuing – known as the ‘whack-a-mole’ strategy by the Prime Minister. Starmer stated that of the cities that have gone into local lockdown, only Luton has had such restrictions fully relaxed. This led to him stating that “it implies that, at some point, the mole goes down and restrictions are lifted”. He then stated that some areas under local lockdown actually have a rising infection rate. This led to Starmer asking whether this strategy actually works.

In other UK news today, students at Coventry University have been seen breaking lockdown rules in a party at the university. In the video, which will be viewed with anger by many who are obeying social distancing guidelines, students can be seen dancing on ping-pong tables.

The university has condemned the actions of those involved in the video and have promised that any students identified would face disciplinary action.

Hopefully this incident is a one-off, and the students who are abiding by the rules represent the majority of the student body.