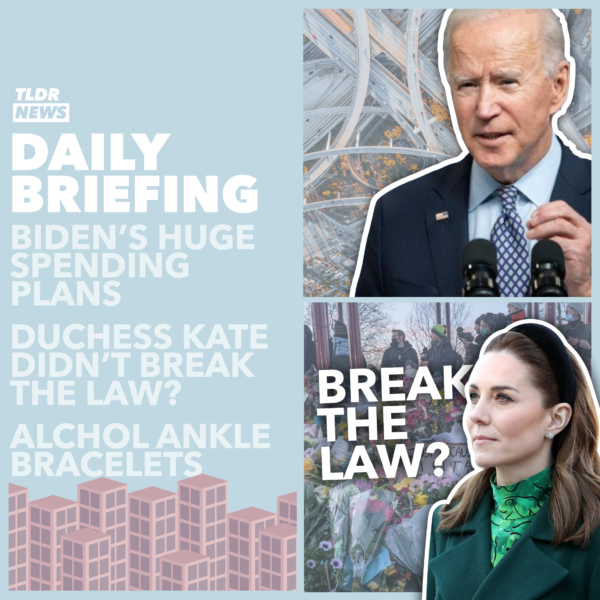 You might remember that a few weeks ago we promised that the Daily Briefing would keep running until at least May. If you want to help us out and let us continue for longer than that then be sure to share us with your friends & subscribe to the podcast or YouTube channel.

In the first story of the Daily Briefing today, we discuss the huge infrastructure spending Biden has planned. Although this has not been announced yet, it is expected that Biden will unveil the project – which will cost around $2tn. As we all know, the pandemic has had not just an impact on people’s physical and mental health – but also the economy.

After the pandemic, it’s reasonable to expect world leaders to use their unique position in history to move their country closer to their ideals. After all, following crises, politicians have a huge amount of political capital to make changes to their country. Here in the UK, post-war Prime Minister Clement Attlee was able to create the welfare state alongside the nationally revered NHS.

It seems that President Biden is planning to emulate these huge changes – specifically through this infrastructure project. It has been suggested that the plan would include funding for traditional infrastructure projects such as bridges, roads and highways. This is alongside projects to build up the electricity grid, expand the high-speed broadband networks, and improve access to clean water.

Some of the other plans surround ensuring that access to community care centres for seniors and people with disabilities is improved.

Around now, people are probably asking exactly how this will be paid for. After all, we’re already going to have to pay for the pandemic itself – which is no small task.

This, too, is only meant to be the first of many phases the President has planned. We’ll have to see exactly how successful he is at enacting such changes. As we know, even politics is often slow and unpredictable.

Kate Cleared of a Covid Breach

In the second story today, we move to the UK to discuss the Duchess of Cambridge’s visit to the Sarah Everard vigil. As those of you in the UK will know, Sarah Everard went missing at the beginning of the month – it was later revealed that she may have been murdered while walking home. There was an outpouring of grief, with many women sharing their experiences. However, many people wanted somewhere physical to target their grief. Vigils were, therefore, planned across the country – in order for people to pay their respects and express their grief. The main one, though, would take place on Clapham Common in London.

Due to coronavirus rules, the police tried to shut the Clapham Common vigil down. They were criticised both by politicians and the wider public for their heavy handed approach – although, yesterday a report by the MET concluded that the police acted appropriately.

One of the lesser discussed elements of this story is that the Duchess of Cambridge went to Clapham Common earlier in the day to lay a wreath in memory of Ms. Everard. Some asked questions about why the other protesters were met with such a strong response from the police while Kate was able to quietly pay her respects.

Today, the MET police commissioner, Dame Cressida Dick, has said that the Duchess of Cambridge was legal because she was “working”. She added that:

“I would imagine that, of course I have not asked her this question, but I think it’s worth looking at … just how strongly people felt, what she said about her attendance there. She’s in the course of her duties, she was working.”

Some have rebutted this defence from Dame Cressida, on the grounds that Kensington Palace said that the trip was “private”.

In the third story today, we stay in England to discuss a proposal aimed at helping police identify offenders breaching court-ordered drinking bans. As part of some sentencing agreements, courts can instruct individuals to abstain from drinking alcohol – if the offender is over-18 and does not have a reliance upon alcohol.

The issue so far has been being able to identify when offenders have broken such rules. Without some technology to be able to identify these rule breaches, it’s impossible to check. Well, as you’ve likely guessed by now, such technology exists (in the form of an ankle tag) and has been trialled in Wales and some areas of England. It’s today been announced that they are being rolled out across England too.

They work by measuring the sweat of an individual each 30 minutes. The technology is able to distinguish between alcohol consumption and the use of alcoholic perfumes and hand gel.

What do you think about this story? Is it a good way to keep an eye on offenders, or does this cross the line into Orwellian dystopia?

In the last story today, we stay in the UK to discuss the cuts being made to science. While the pandemic has led to huge sums being invested in all sorts of research projects – from vaccine production to drugs that are able to lessen the impact of coronavirus – it seems as though this funding may simply be temporary.

It has today been revealed that many scientific projects are being axed by UK Research and Innovation (the UK’s main scientific funder). The best example of these cuts come from the fact that the budget for official development assistance (ODAs) given to universities will be cut from £245m to £125m.

About these cuts, Sir Paul Nurse, the Nobel laureate and director of the Francis Crick Institute in London, said:

“It is absolutely vital that the government continues to support science. Some of the cuts we’ve been hearing about would be catastrophic, even existential”.

We cannot yet find an explanation of this from the government. We’ll have to keep an eye out to see how they explain such a cut.