Just so we’re all caught up here… On Tuesday 26th, a majority of MPs voted to momentarily take control of parliamentary proceedings, allowing them to put forward a number of alternatives to Theresa May’s withdrawal deal. They put forward a range of suggestions including: 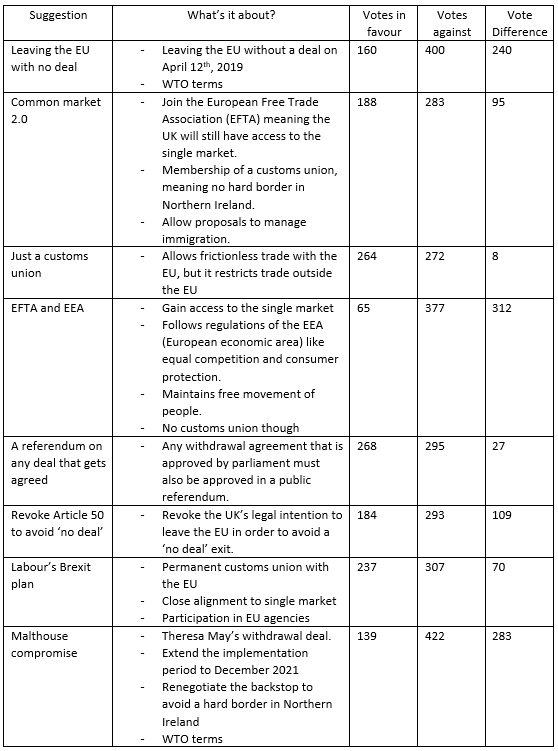 As you can see from the table, there was no majority in favour of any of the proposed motions. As the UK can not seem to agree on anything, it is difficult to say where they might be headed. MPs have another opportunity to cast their indicative votes on Monday, in an effort to single out the most popular options.

What about Theresa May’s Deal?

Whilst MPs cast their indicative votes, Theresa May is still determined to see her withdrawal agreement approved by parliament, so much so, that she has declared her resignation should MPs decide to back the deal. This is certainly an interesting development and has potentially proved effective. A number of conservative MPs have now said they will back her deal, meaning it may even be approved if it is put forward to parliament another time. It is particularly interesting, as MP’s that were passionately against the deal, will now support it on the basis that Theresa May is no longer the Prime Minister and there is certainly a cause to question their motivations.

But what about Erskine May?

Ignorant to the motivations of these new supporters, it may not be possible to bring the deal back for a third vote at all. The speaker, John Bercow, has already told the prime minister that she is prohibited from suggesting her deal to parliament for a third time unless substantial changes have been made. The speaker is enforcing this by citing Erskine May, a guideline for parliamentary practice that prevents the same issue to be debated more that once in a parliamentary session. (see our video about it here).

This means that Theresa May will have to make a substantial change to her deal if she intends to present it to parliament with her newfound support. Best thing to do is to stay fixed to our channel and we’ll update as it happens.