Who is Going to Replace May?

That begs the question, who will replace her? In this article, we’ll go through some of the options. The bookies have already started speculating, so we will take a look at some of the frontrunners, as well as some relative longshots and see why they have the odds that they have.

Firstly, just a quick overview of how the Tories decide on their leader. The Conservatives have a system where the parliamentary party selects two candidates by slowly whittling them down in stages where the candidate with the lowest number of votes is excluded. Once only two remain, the wider membership, i.e. Conservative party members, get to vote between these two. It is rare to get a situation as we saw when May came to power in 2016, where the contest never even reached the Conservative members as only one candidate remained during the parliamentary rounds. The point here is that the Conservative MPs have a lot of control over who the wider party votes between. This has historically meant that you don’t need to be the most liked candidate to get to the final round, you simply have to be the least disliked. For example, even though Heseltine was a well known politician who initially stood against Thatcher, it was the more unknown John Major who became leader.

Boris Johnson is one of the best known Conservative politicians. A couple of days ago, he announced that he will stand for the leadership when Theresa May has stepped down, as if this wasn’t obvious enough already. While most recent polling puts Boris as by far the most popular candidate amongst the party membership, the way the Conservative leadership election works is important to note, because although Boris Johnson is well known and has been angling for PM for about as long as anyone can remember, his many enemies in the parliamentary party could make it difficult for him to make it to the final two. In fact, a Guardian article in March pointed out that a number of Conservative MPs had threatened to resign if he was to become leader. Prior to the Brexit party, it wasn’t looking like he’d make it, with so many MPs so strongly opposed to him. But as the Brexit party kept stealing more and more of the Conservative vote, and with Labour polling consistently higher than the Conservatives, Boris’ chances have drastically improved. Conservative MPs realise they need a Brexiteer to win back Brexit party voters, and seem to also think that Boris is the best man to take on Jeremy Corbyn. He’s got a public profile, and according to YouGov is the most liked Conservative politician, and, as well as winning back Brexiteers, he’s got a proven track record of electoral success in London. For the moment at least, he’s the frontrunner.

So, if not Boris, then who?

Michael Gove has long been touted as a future Tory leader, coming third behind May and Andrea Leadsom in the 2016 leadership contest. This came after he controversially went against his promise to support Boris in any leadership election. While he was a Brexiteer during the referendum, his continued support of May and her deal might have weakened his Brexiteer credentials with the hyper-Brexiteer conservative membership. Nonetheless, his history as part of shadow or full cabinet since 2007 puts him in a strong position to campaign on his leadership experience.  Although seen as more competent and steadier pair of hands than Johnson, his image also is often a source of mockery whilst he is prone to a gaffe or two. For example, different news outlets have mocked the way he drinks water. Although unfair and pretty savage, the British media have made similar criticisms of past leaders such as Miliband (remember the infamous bacon sandwich?). This means that despite his experience, he may suffer at the cruel hands of the British media were he to lead the party into a general election. His odds are between 7/1 and 10/1 with the bookies.

Another strong contender is Jeremy Hunt. Hunt is another big player in the Conservative Party, previously being Secretary of State for Health, Secretary of State for Culture, Media and Sports, Minister for the Olympics and currently being the Foreign Secretary. Quite controversially, as Secretary of State for Health, Hunt received a lot of criticism for, arguably, putting the NHS into crisis. However, he also suffers from one of the things troubling May and some of the other contenders – he also supported remaining in the EU in 2016. This means that the Eurosceptic wing may not support him as they may want a leader, unlike May, who supported the cause they support. Despite this, his experience has helped him become one of the front runners. Additionally, he has even claimed in the past that he would be interested in having “a crack at the top job”. The bookies have put his odds between 10/1 and 8/1.

Dominic Raab too is a top candidate for the job. In an effort to give himself a USP, he has sought to be considered the best leader for a no-deal scenario. He’s also the youngest candidate, so might help the Conservatives attract some younger voters. He was relatively unknown until he became a minister in 2017, before quickly rising to his (short-lived) Brexit Secretary tenure in mid-late 2018. During that time, he didn’t do much for his future leadership ambitions, committing a major faux-pas when he suggested that he wasn’t aware of how important the channel was to UK-EU trade, but to be fair, Brexit Secretary, as a job, is a bit of a hospital pass. Raab is a less divisive figure than Boris amongst Conservative MPs, and, as a fellow Brexiteer, is also popular amongst the Conservative membership, which might give him an edge against the man to beat.

Another of the leading candidates is the current Home Secretary, Sajid Javid. He is a highly regarded politician in the Conservative Party and for someone who only entered Parliament in 2010, he already has a wealth of experience (he has held 8 ministerial positions, including 4 Secretary of State positions). Unlike many of the aforementioned candidates, Javid has managed fairly well to operate without controversy despite coming into the Home Office amid the scandal over the poor treatment of the Windrush generation. He would be the first BME leader of the Conservative party, or any major party for that matter. Javid was the favourite for a bit, but with the rise of the Brexit party, as someone who campaigned for Remain, his odds have got longer, as the Conservatives look to the Brexiteers to reclaim those lost votes.

Among relative outsiders, in recent weeks there has been talk of David Lidington. Lidington would fit the bill of a candidate with few enemies, making him a potential candidate to get to the final round of voting. An MP since 1992, he has held several cabinet and shadow positions, most notably Minister of State for Europe. Lidington is widely-known to be vehemently pro-EU, even earning the moniker ‘Mr Europe’. Although he is seen within the party as a safe-pair of hands currently the PMs no.2, his feelings on Brexit will pose problems for him with the members if he seeks to assume the leadership.

Some have wishfully speculated about the appeal of Jacob Rees Mogg. He has become a bit of a cult-figure and has quite a following of Tory activists, with a former winner of I’m a Celeb Georgia Toffolo surprisingly calling him a “sex god”. Weird indeed, but it highlights the support he has. However, his stance on certain issues such as abortion has got him in some hot water in the past and may make it difficult to win support from the public if he were to make it to a general election. And while he’s very popular, he’s actually never had a ministerial position, so going straight to the top job from backbencher might be a bit of a leap. That being said, he’s exceptionally popular with the Conservative membership, and at one point in time was actually on course to beat Boris in the last 2, according to YouGov.

Which of Them Could Win?

The Conservative leadership is impossible to predict at this stage, and all will become a lot clearer when the Prime MInister is gone and candidates officially declare. At this stage, Boris and Raab seem to be the most realistic candidates because of their consistent pro-Brexit stances and popular appeal, but in Conservative leadership races, infamously, the front runners seem to dragged down, so no one can really predict how it’ll pan out. Anyway, Conservative MPs and members must think carefully about choosing their next leader – this person will not only lead the party in the final stages of Brexit, they will have to be electable too.

We have made a table, shown below, that provides a summary of potential leader candidates. Obviously, it is a massive simplification and should be used just to get an overview of the information surrounding candidates. 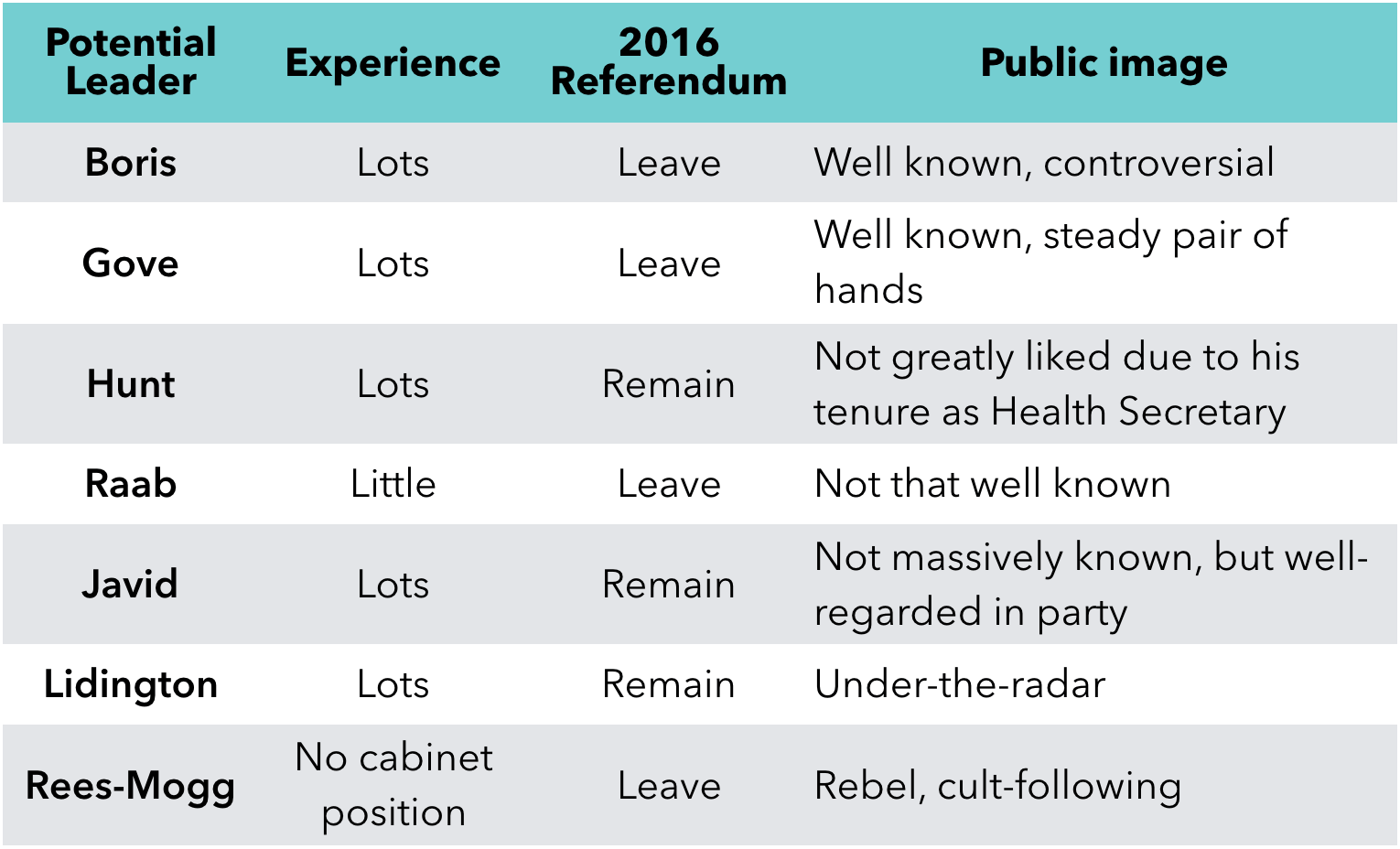