No Deal Has Been Rejected by MPs

So, two major votes have happened in two days. Yesterday, Theresa May had her deal rejected by the parliament and now, today, the prospect of a no-deal Brexit at any time has been rejected with a majority of 43.

Technically, an amendment has been agreed to that rewords the notion to state that the UK rejects a no-deal Brexit under any circumstances.

Why Did This Happen?

Well, firstly, a lot of MPs don’t particularly like the idea of a no-deal Brexit. The government’s own report claimed that the UK economic growth would be 6.3%-9% smaller in the long term (after about 15 years) and that 240,000 businesses would need to interact with the customs process for the first time (costing the UK £13bn per year in administrations fees). Some would dispute these claims, especially considering they are coming from a government that had (at the time of publishing the document) been advocating for Theresa May’s deal – but, without making judgement as to whether this would or would not be the case, it likely played a role in why MPs rejected tonight’s bill. Indeed, Yvette Cooper and Hillary Benn have, today, made the argument that they do not think a no-deal is right for the country

Additionally, other Conservatives such as Ken Clarke and Dominic Grieve have made a similar argument.

The Independent Group have also made comments today showing that they do not support a no-deal Brexit. Most notably Anna Soubry, who has claimed that it is “shameful” that members of the government are trying to make a positive case for no-deal

Technically, we simply move on to the next vote in this week’s succession of Brexit votes: the vote on extension. 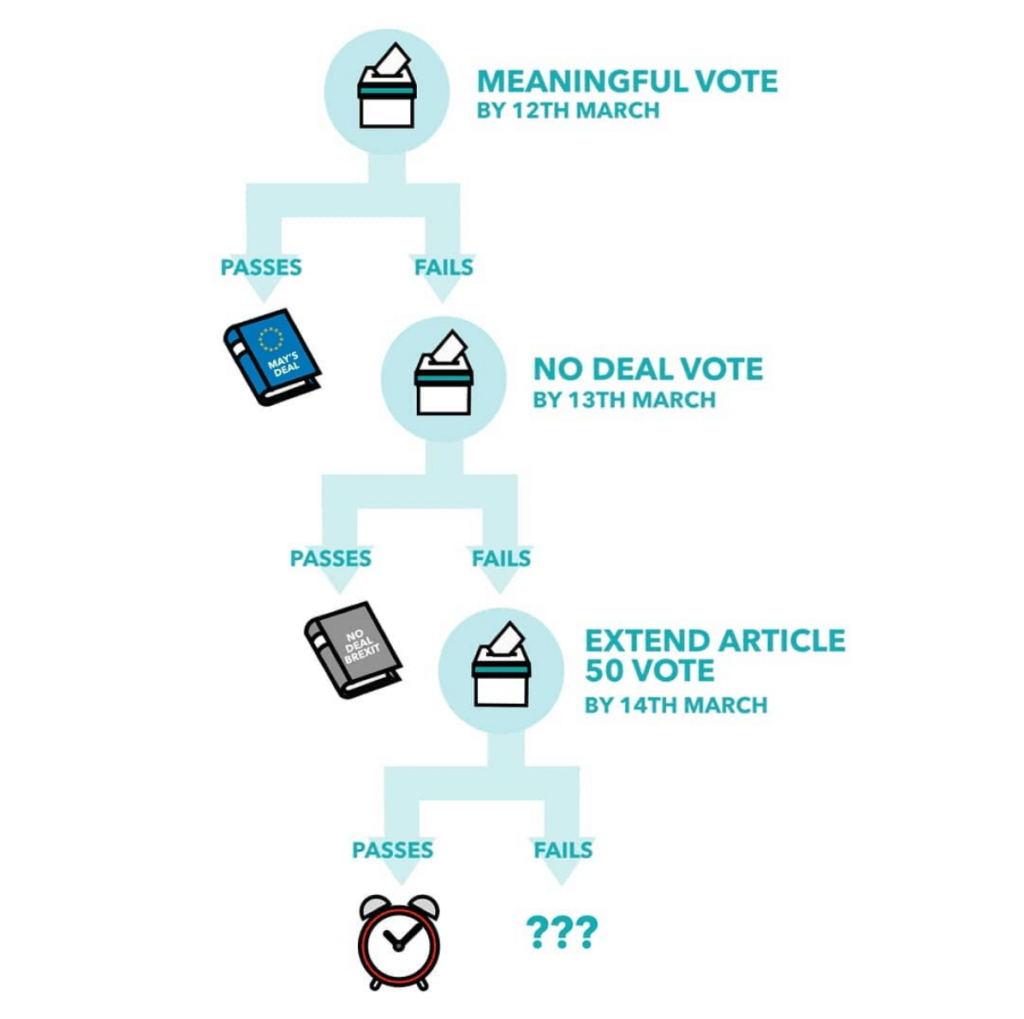 It is important to note that if the UK parliament does agree to applying for an extension tomorrow, it doesn’t guarantee that the EU will approve it. They have already said that the UK needs a good reason to extend the deadline, and currently we are leaving on the 29th March unless something else is agreed. It is important to note that the other 27 member states of the EU are required to accept the request for extension.

Therefore, even though the MPs have voted against a no-deal tonight, we may still leave with a no-deal on the 29th if the EU doesn’t think we have a good enough reason to extend the deadline.

Some have claimed that there will be a series of indicative votes – basically a series of votes to determine what parliament actually wants. Some even claim that Theresa May will be forced to agree to this tomorrow.

Again, it has been claimed that there may now be a Meaningful Vote III, now that we have accepted that we don’t want to leave without a deal.

Additionally, some have claimed that there should be a general election – most notably the Vice Chairman of the 1922 Committee, Charles Walker (the group that represents backbench Conservatives) and Jeremy Corbyn (you know who he is). Labour have claimed today though that it is not the right time to try to trigger a general election (through a process of a vote of no confidence in the government) because it isn’t the right time. They have claimed that they will wait until tomorrow’s vote has happened, according to the political editor of the Daily Mirror, Pippa Crerar.