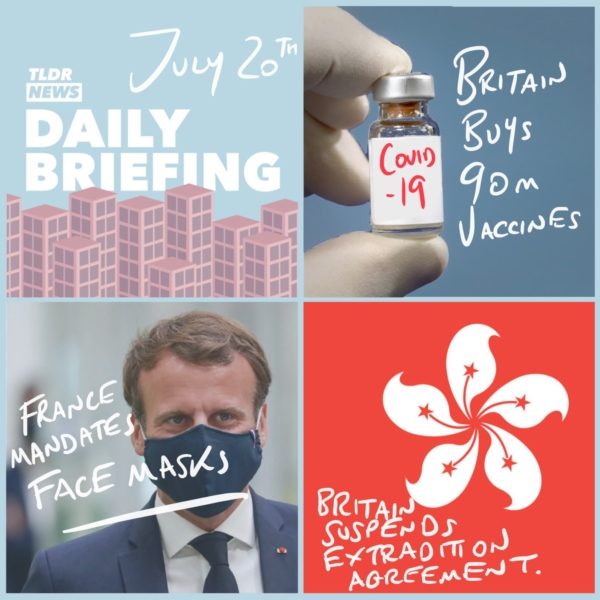 If you are new to the Daily Briefing, hello and welcome! We are aiming to update you every day on what has happened in the news both from the UK and from around the world.

The UK has already signed a deal which promises to buy 100m doses of the Oxford vaccine, if it is proved to be effective. Today, though, the government has signed a deal for 90m doses (combined) of two other vaccines: 30 million from BioNTech (who uses part of the coronaviruses’ genetic code) and 60 million from Valneva (which uses an inactive version of the coronavirus). This means that the UK is happy to pay for whichever of those three vaccines proves successful.

In fact, later today news was published regarding the first stage of clinical trials for the Oxford vaccine. It has been shown that, of the 1,077 people who took part in this stage, 90% developed antibodies after the first injection.

Phase 1 of the clinical trials has shown that levels of T-cells peak at around 14 days after receiving the vaccine, whereas levels of antibodies peak after 28 days.

In other news, due to an outbreak of coronavirus again in France, French authorities have mandated the wearing of masks in indoor public places. This means that anyone caught not wearing a mask faces a fine of around £123.

This makes sense considering how affected France has been by the virus and how the reproduction rate (known as the R-number) in a lot of places is still particularly high. France has recorded over 30,000 deaths relating to coronavirus since the beginning of the pandemic and, in the region of Brittany, has an R-number of 2.6. This means that every one person with the novel coronavirus passes it on to another 2.6 people.

And, in more global news, the Foreign Secretary here in the UK has announced the “immediate suspension” of the extradition agreement between the UK and China. This comes after weeks of escalating tensions between the two nations after controversial laws were introduced in Hong Kong that supposedly broke the principles of freedom of speech.

But why did the Foreign Secretary suspend this extradition agreement? What has changed?

The UK government sees this as unacceptable and have, therefore, suspended the extradition agreement.

We will be keeping an eye on the situation as it develops.

For those of you who think the news is too long, have a read of the next daily briefing tomorrow. Subscribe to the newsletter at tldrnews.co.uk/daily.