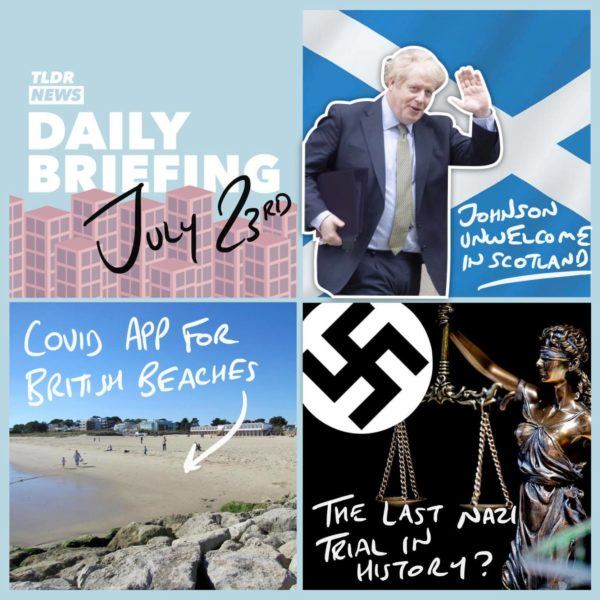 July 23rd:Scottish Independence, An App About Beaches and a Nazi Trial

A Trip to Scotland

Prime Minister Johnson has, today, visited Scotland – claiming that the coronavirus has shown the “sheer might” of the union of the United Kingdom. Despite being in Scotland, the First Minister (Nicola Sturgeon) said that she has not planned to meet Mr Johnson.

In fact, instead of meeting the Prime Minister – she criticised him. She claimed, in response to his comment about the pandemic and the union that no one should be “championing and celebrating” the pandemic.

This isn’t the first time in the last week that tensions between the two have been uncovered. First Minister Sturgeon turned 50 over the weekend and some noticed a card with the words “I’ve hired a first class clown for your birthday” on the front, accompanied by a picture of someone who looks oddly like the Prime Minister sitting on her windowsill.

Although this wouldn’t make for particularly interesting news normally – the fact that support for Scottish Independence is now creeping up again makes their disagreements more salient. In a recent poll conducted on the 5th of July 54% of Scots said they supported independence as opposed to only 46% who said they didn’t.

An App About Beaches

In other UK news, Bournemouth, Christchurch and Poole Tourism have developed an app to inform potential beachgoers how busy the beaches are.

The app is available on Apple and Android and uses a traffic light system to inform people whether the beach is safe to go to in regard to social distancing.

The aim is to try and stop the overcrowded beaches that flooded the newspapers over the last few months. If people know how busy a beach is before they set off – they might reevaluate their decision to go to a particular beach, or even decide to go to a less busy one.

There is now no excuse to flout social distancing rules at the beach.

The Rules About Masks

And again in UK news, the government today has announced the rules over wearing face masks which come into force tomorrow. In breaking these rules, you could subject yourself to a £100 fine. If you have £100 to spend, there are much better ways to do so.

The rules apply to supermarkets, shopping centres, post offices and transport hubs. There are exceptions, though, about who has to wear them. Children under 11 and those with disabilities or certain health issues are among those who are exempt.

Although this guidance has been published today, the government has been criticised. This is due to the fact that the enforcement of facemasks comes into force tomorrow and this guidance has only been published today. This is a particularly bad look for the government considering their reasoning for not enforcing the rules earlier was so that businesses and people could ‘prepare’.

In other world news today, a former Nazi prison guard (Bruno Dey, 93) has today been found guilty in Hamburg of accessory to 5,232 murders due to his work as a prison guard at the Stutthof concentration camp. As he was only 17 at the time, he faced a youth court. His sentence was a two year suspended jail sentence – although the state prosecutor had argued for three.

This is thought to be one of the last Nazi trials in history. This goes to show that while the coronavirus pandemic persists – courts across the world are still working hard to ensure that justice prevails and that, even some of the most historic crimes, do not go unpunished.