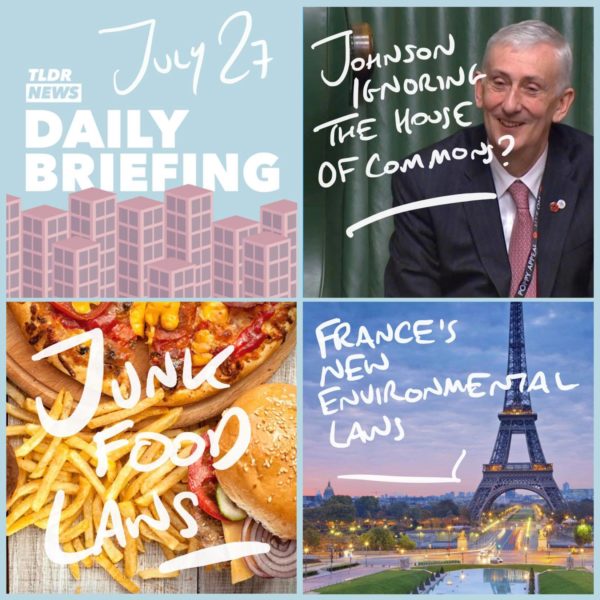 To start today’s briefing off we thought we’d go with some good news. It’s fair to say that most people have dealt with lockdown differently – some have been just trying to get by and have not been as productive, others have embarked on new projects and have been more productive than ever.

Over in the US, Kenneth Felts, decided to write his memoirs. When going through it he reminisced about a man he used to love, and decided to come out as gay to his daughter – who herself came out to him decades earlier. At 90 years old, this was undoubtedly a big step for him and led to him claiming “I’m free”.

Even during this pandemic, people are reflecting on the past and living their lives – and it’s these heartwarming stories that are often at the bottom of news website pages. We thought that today, it should be at the top of ours.

Moving onto news across the sea back here in the UK, the speaker of the House of Commons Lindsey Hoyle has expressed concern for Prime Minister Johnson’s planned Number 10 Downing Street Press briefings. For those of you who haven’t heard, the Prime Minister is planning on converting a room in Downing Street to allow for press briefings – similar to those held for the president in the United States. The speakers’ concern is that this would sideline parliament.

Whether the government will heed the Speakers’ advice is yet to be seen.

In other news, as part of Prime Minister Johnson’s plan to reduce obesity in the UK – buy one get one free deals on unhealthy food will soon be banned in England. This comes alongside a ban on junk food adverts before 9pm in the UK.

Although this is good for the UK generally, it also comes as part of the government’s plans to defeat this coronavirus. According to government statistics, 8% of those who are intensive care units are morbidly obese, which is compared to only 2.9% of the population. This goes to show the impact this coronavirus can have on those who are morbidly obese.

Other measures that will be used to try and tackle this problem are yet to be announced.

In other news, France has today announced some new rules designed to protect the environment. One of these rules is banning outdoor heating/air conditioning, which have been described as an ‘ecological aberration’.

It has been claimed that 75% of restaurants and cafes in Paris have outdoor heating – which would explain why the ban is coming into force.France is no stranger to using legislation to try and protect the environment. It has already introduced a ‘ecocide’ rule – which you can learn more about in our video about it here.

Clearly then, damaging the environment in France is becoming a worse and worse idea by the day.