Home TLDR UK July 28th: A Twitter Takedown, Self-Isolation from Spain and an App for Queuing 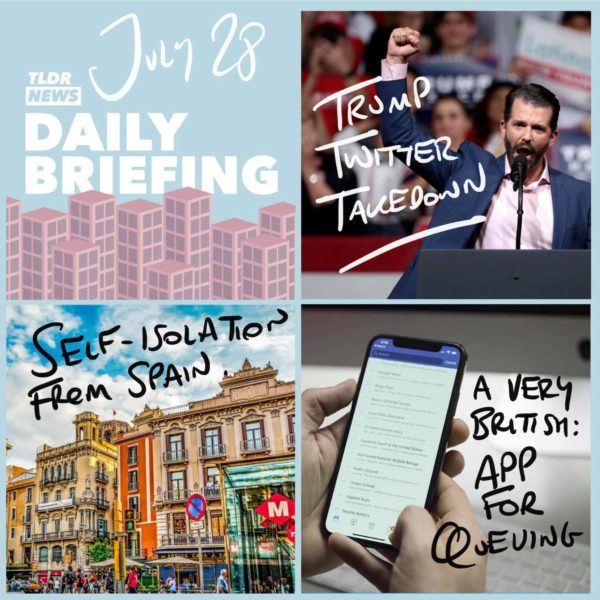 July 28th: A Twitter Takedown, Self-Isolation from Spain and an App for Queuing

The first news item in today’s briefing comes from the United States. It seems that the battle between Twitter and the President has, today, reached the President’s son Donald Trump Jr. He had his account restricted for 12 hours – meaning that he cannot post anything, follow anyone new or like any tweets. This has enraged some, claiming that this is becoming a free speech issue.

The reason Trump Jr’s account was suspended relates to a tweet about hydroxychloroquine – claiming that it is a ‘cure’ for COVID-19 and showing people appearing to be doctors backing it and claiming that you “don’t need masks” and that those who argue against hydroxychloroquine are using “fake science”. Twitter claims that this is, in effect, promoting false information.

Whether Twitter will continue to double down on their policy of deleting ‘fake information’ promoted by people in positions of power, including the president, is yet to be seen and will be an interesting story to follow in the weeks leading up to the presidential election.

In other news, back here in the UK many holidaymakers are displeased at best over the news that they will have to self isolate for two weeks on their return from Spain. This was announced as it appears that Spain is about to go through a second wave of COVID-19.

However, it has been suggested that the government is now looking into a system whereby holidaymakers would be eligible to be tested 8 days upon their arrival back in the UK. If a negative test is returned they would be allowed to end their self-isolation after only 10 days. This could be a big change for those worried about missing work days and other social gatherings and may alleviate some of the anger at the government from holidaymakers about the new self-isolation rules.

An App for Queuing

In other news, Sainsbury’s supermarkets are now trialling a remote-queuing app. This would mean that shoppers could wait in their car until they are able to enter the store, instead of queuing outside the supermarket itself. This is beneficial for a number of reasons. Firstly, it is arguably safer as people are not standing closely together waiting to get in, they are far more socially distanced in their cars. Secondly, people can listen to their favourite Hamilton songs on full volume in their cars as they wait which, as we can all accept, is far more fun than standing in the rain listening to it through headphones.

Unfortunately, this is not yet a feature in my Sainsbury’s so Hamilton will have to play through my headphones in a physical queue for the foreseeable future.