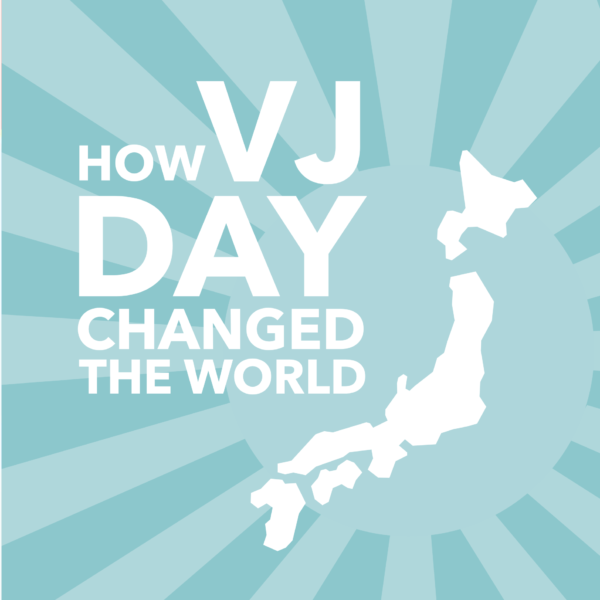 How VJ Day Shaped The World

Soon after the atomic bombings of Hiroshima and Nagasaki on the 6th and 9th August and the USSR’s subjugation of Manchukuo and Korea, Japan surrendered on the 15th August 1945, bringing the Second World War to an end. Following years of hardship and sacrifice, the conclusion brought a wave of relief to many. While for others, this moment beckoned a future of uncertainty and dramatic change, for both Japan and global relations. 2020 marks the 75th anniversary of this defining moment of the 20th century.

With the end of the War, the occupation of Japan commenced. Led by General Douglas MacArthur, the Supreme Commander of the Allied Powers (SCAP), with support from the British Commonwealth, the objective was to disarm, demilitarise and democratise Japan. As a result, Japan was governed by the US through the Japanese bureaucratic system. SCAP imposed a reformed Japanese constitution. Most notably, this resulted in a constitutional monarchy, Anglo-American bicameral system and the creation of Japanese citizens rather than subjects. In the climate of the Cold War, the US aimed to rebuild Japan as a bastion of capitalism and democracy against the increasing infringement of communism in the Asian sphere. In 1947 US-led SCAP adopted the ‘reverse course’, however, Japan was reluctant to increase investment in rearmament despite US pressures to do so, instead focusing more on improving living standards.

The question remained, however, is rearming the same as remilitarisation? Under Article 9 of the new constitution, Japan was disarmed, preventing the formation of a military force, positioning the country under international protection. Japan entered into collective security through the 1951 Security Treaty with the USA, leading to subsequent debates over an individual nations’ right to unilateral security. For instance, the island of Okinawa effectively becoming a colony, with a permanent US military force stationed there – a lingering domestic and international relations issue between the US and Japan to this day. Then, in 1950, Japan developed a new armed constabulary, which the US viewed as a military force, which had 75,000 men. In 1952, this became the National Safety Force; and eventually by 1954, the Japan Self-Defense Force (which received large scale investment and became increasingly more technologically advanced). The approach to external threats came in the form of ‘defensive-defense’ or forward attacks, justified by their potential threat, however, Japan lacked international status, being unable to be a permanent member of the UN Security Council which had been established in 1945. The 1952 and 1960 Security Treaties locked Japan into the US worldview, resulting in the expansion of interventionist policies to ‘areas of interest’, while generating widespread opposition within Japan. Ranging from the left-wing political organisations to older generations, who recalled the brutality of fascist militarism during the 1920s and 1930s.

These changing global relations had a socio-economic impact on the make-up of Japan. For example, in 1951, MacArthur bans a general strike, results in the Red Purge. This removal of left-wing power weakened the organisation of labour nationally, rehabilitating larger business groupings called zaibatsu in turn, this contributed to the development of smaller differentials and greater levels of egalitarianism. Nevertheless, a major turning point in the labour movement of Japan came in 1960, with the Miike Coal Mine strike. Despite the overtly violent confrontation ultimately failing to achieve its initial aims, it heralded an improvement in wages, working conditions and lifetime job security in Japanese industry moving forward. These values by the 1970s and 1980s, informed what became known as a ‘corporate-centred society’.

Simultaneously, the country experienced considerable economic growth in the post-war period. In 1949, the Dodge Line was introduced, ensuring fixed exchange rates between the Yen and the US Dollar, in the aim of creating a freer Japanese economy. Alongside a direct taxation-heavy system from 1950, with no form of indirect taxation until 1989, Japan experienced consistent surplus budgets. In turn preventing inflation and ensuring stabilisation. Japan further benefitted from the pursuer mode of development, rationalisation and technology strategies such as reverse engineering.

Between 1947 and 1960, the US opened its own as well as other international markets to Japanese industrialisation and exportation; with only 1% of Japanese GNP being spent on the military there was large-scale investment in civilians developments and manufacturing industries as a result; the US-Japan Alliance, allowed for the transferring of commercial technology, training and equipment – interestingly, certain civilian developments contributed to the progression of military technology. The outbreak of the Korean War in 1950 until 1953, for instance, provided Japan with a unique source of increasing industrial and manufacturing output – curbing a beckoning recession within the country.

From 1955 onwards, the Liberal Democratic Party (LDP) in Japan held effectively one-party dominance of government. By ensuring continued economic prosperity, the LDP proved an immovable political hegemon until the financial shock of 1989, rocked the boat and brought about change in Japanese politics and international relations during the 1990s or ‘The Lost Decade’.

Fundamentally, Japan became governed by an ‘iron triangle’ in the post-war period, known as the 1955 System. This combination of elite bureaucracy, with government authority and the influence of business, produced internal economic integration and rapid development.

Japan became an influential conservative pacifist power from 1955 to 1975. Ron Dore described the emergence of ‘tamed’ or ‘welfare capitalism’ in Japan during this period through social and economic development, coupled with political stagnation. This reveals the innate contradiction between conservatism and pacifism which defined Japan in the post-war world. A world many described as a period of Pax-Americana. Ministry of International Trade and Industry became hugely influential, in coordination with the government, in ensuring economic transferability with the US, capitalising upon the normalisation of trade relations during the 1950s and 1960s with neighbouring countries, and the expanding consumer society of Japan. Japan’s inseparability from the US was unavoidable in the post-war decades.

After 1972 Japan became the second largest global economy behind the USA. The 1980s saw a toxic relationship between the two nations develop as Japan transformed into a technopolis. Under the Nixon administration relations became strained with Japan. The lingering post-war contention surrounding US military bases in Okinawa became the centre of diplomatic disputes, in particular the positioning of nuclear armaments on the island in conjunction with independence movements. It wasn’t until 1971 that Okinawa was returned to Japan. Meanwhile, Nixon’s intensification of conflict in Vietnam threatened Japan’s relations with China and Russia in particular.

Economically the 1970s and 1980s were a period of dramatic change in Japan. The OPEC oil crisis of 1973 proved a major blow to the Japanese economy, seeing inflation rise to 24% and the development of negative growth. Moving into the 1980s, Japan experienced the decline of traditional, heavy industries with strong union bases closely associated with post-war development, such as coal, textiles, shipbuilding and chemicals. This was accompanied by urban and social decline in areas previously dominated by these industries. In response, the government aimed to limit the rise in unemployment and encouraged free market economics due to the political repercussions of failing to maintain these aspects. Agriculturally, the traditional tariffs on rice imports were lifted due to a decline in production levels associated with the shrinking rural population through increasing urbanisation. 14 out the 25 largest companies in Japan were either automobile or technology manufacturers – Japan’s economy expanded to include 60% service industries during the 1980s.

Relations between Japan and China evolved considerably during this period, with a normalisation of trade relations taking place between 1972 and 1979 under the PM Tanaka Kakuei. This came following Nixon’s 1972 engagement with China marking a new period in the Cold War. Following the death of Mao in 1976, China embarked a period of reform under Deng Xiaoping, aiming to restore Chinese technocracy resulted in a period of open reform. Japanese development loans were implemented, however, interestingly, Japan did not take on as greater role as expected in the reform of China. Oil from Dongbei in northern China to Japan after 1973, eased the pressure on the nation caused by the OPEC oil crisis, reducing dependency on volatile central Asian and Middle Eastern nations, while commodity exports from Japan to China, provided an economic boost to Japan in order to pull the nations out of the slump of the 1970s. Meanwhile, culturally, Honda Katsuchi conducted research on the Nanjing massacre committed by Japan in 1937, due to the entrenched unwillingness in Japan to acknowledge actions of the Second World War, a lingering issue with the Shinto enshrinement of fallen soldiers, despite the separation of state and religion. However, the rise in Chinese nationalism during the 1980s, set the stage for what has subsequently developed into diplomatic confrontations.

1989 everything changed for Japan. While in Europe the post-war political order of communism was becoming increasingly challenged, Japan’s ‘bubble economy’ burst in dramatic fashion. Through a combination of overvalued land, low interest rates, and non-performing loans, banks began to decline, culminating in a 60% market loss in one day. The repercussions of this economic collapse brought to an end in 1993 the LDP political dominance which had characterised post-war Japan since 1955.

Ultimately, the vestiges of World War II and the occupation of Japan by SCAP, led by the United States, determined the trajectory of Japanese domestic and global development over the course of the 20th century and to the present day. From international manufacturing relations; to cultural proliferation, on the 75th anniversary of VJ Day, Japan has evolved into a global economic and political leader.

A. Gordon, A Modern History of Japan

Peter Frost, ‘Debating the Allied Occupation of Japan’ (through the Association for Asian Studies): Part One and Part Two.

Ian Gow, ‘Japanese-Style Management and the Issues of Transferability’ (1987)